Your first week is just $1.

Then it’s just $149/month for unlimited classes with our 450+ teachers.

And then $149/month after your first week. Cancel anytime.

What is BaseLang?
BaseLang offers unlimited one-on-one Spanish classes with native teachers via Zoom.
‍
Tens of thousands of students just like you have learned Spanish with us - most of which had tried and failed to learn Spanish before trying BaseLang.

Our Real World program focuses on teaching you how to speak. Our curriculum is optimized to get you having conversations fast. You don’t need to do anything to “get ready” for BaseLang. You can start with absolutely zero Spanish.

For more advanced learners, we have our DELE program for classes all the way to C2, included in your tuition.

WHEN FACE-TO-FACE WITH A REAL SPANISH SPEAKER, DO YOU FREEZE?

If you’ve learned any Spanish before, you probably focused on learning the “stuff” of the language - grammar, vocab, perhaps pronunciation.

But what good is all of that if you can’t effortlessly use it in real conversations with Spanish speakers?

Sure, you know the stuff.  But if every time you go to form a new sentence, you are searching your brain for the right sentence structure, the right conjugation, that word you can never remember...

...then you have a problem.

Your Goal is to Have Natural Conversations With Real People... Right?

Then you not only need to learn the grammar and vocab, but become confident using it.

So if you’ve done the entire Duolingo curriculum...
Listened to the Pimsleur tapes...
Taken academic classes...
Memorized hundreds of words of vocabulary...

It’s not that you aren’t good at languages. It’s that you’ve been skipping half of the entire process - speaking!

There Are TWO PARTS to Becoming Conversationally Fluent in Spanish

Part one is learning the “stuff” of the language
(the vocab, the grammar, the pronunciation, etc).
‍
Part two is becoming confident using that stuff by having lots of conversations.

Formal classes like given in high school, college, and language schools

BaseLang, where the curriculum has been hacked to reduce how much you have to learn

Hourly tutoring, which costs upwards of $15 an hour online and $50 in person

BaseLang, where you pay $149 a month and get as much one-on-one conversation time as you want

No Matter How Much Time You Spend on Part One, If You Don’t Have Lots of Conversations, You’ll Never Become Conversationally Fluent.

That’s where we come in.

At BaseLang, you get unlimited one-on-one Spanish tutoring with professional teachers, over Zoom, for just $149 a month.

We focus on getting you from zero to conversationally fluent, so you can:

•  travel or live in Spain or Latin America without living in Google Translate
•  join the Spanish conversations your latino coworkers, friends, or family members are having
•  date Spanish-speakers without embarrassing yourself
• watch Spanish movies and TV shows like Casa de Papel and Narcos without subtitles

Classes are available from 6am to midnight Eastern US time. We maintain high availability.

Classes happen one-on-one over Zoom, so you can take them on almost any device, anywhere in the world.

You can book classes at the very last minute (literally). Or, book five days in advance to plan ahead.

You can actually take as many classes as you want. There are no limits, ever. Some people take 5+ hours a day!

Your first week is $1. After that, you’ll be charged $149 each month unless you cancel. Pay with card or PayPal.

From ZERO Spanish at all, to advanced speaker, we adapt specifically to your exact needs.

Want to use our teachers for conversation practice only, or use your own curriculum? No problem.

We give you everything you need, including flashcards that align with our lessons and review materials.

Plus Our DELE Program Included FREE

Our signature Real World program is the fastest way to become conversational, and what we recommend all students use until they are at least intermediate.

But once you’re already conversational, a more rigid program is ideal to learn advanced grammar, clean up any errors, and get better at reading and writing. We have a full DELE program for exactly this, all the way up to C2.

The DELE program for advanced learners is included FREE with your Real World subscription.

If at any point in the first 35 days you don’t absolutely love BaseLang, we’ll not only give you a full refund, but we’ll send you $20 for wasting your time.

Your First Week Is Just $1.

Join the 10,000+ students who have learned Spanish with BaseLang. 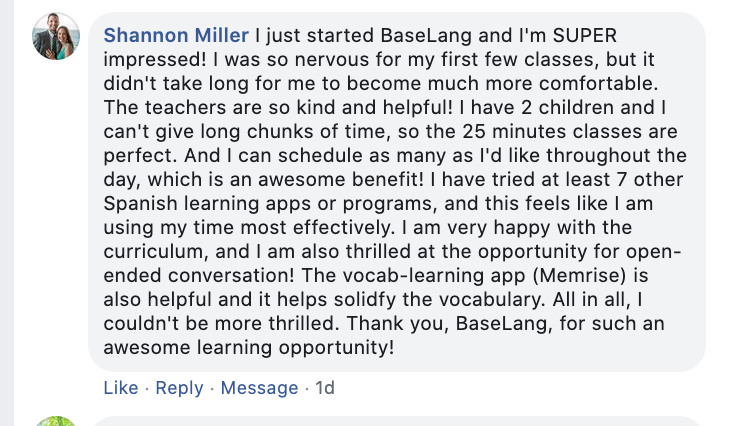 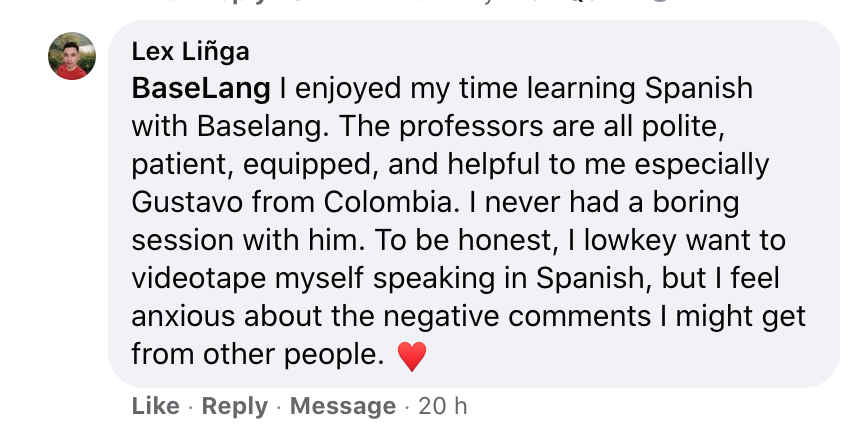 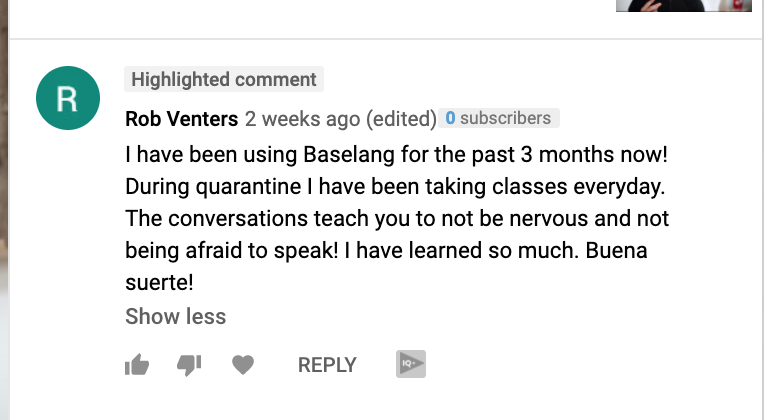 Your First Week Is Just $1.

After that, it’s just $149/mo for unlimited one-on-one tutoring.

Remember, the worst case scenario is you get a few free classes, don’t like it, and end up with an extra $20 in the bank.